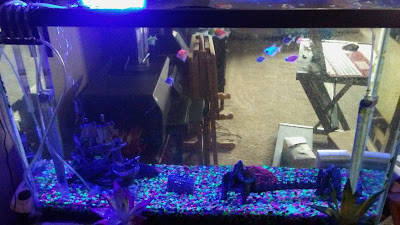 Hi Everyone... Here is another place I Find My Water and Turn My Blue Mind On! This is my brother's fish tank with his Neon fish and two of his Plecostomus fish. I don't know what he feeds them but man do they get big! :-) Maybe Milk...inside joke HA! The girls and the boys each had tanks in their rooms when we were little. One day my folks went into my brother's room and the tank was all white and they had no idea what happened. My brother said he gave the fish his milk because he thought they might be thirsty. HA! Actually, it makes perfect cognitive sense for that developmental age. :-) I love watching fish! We all know they bring our blood pressure down. When I was growing up I had a goldfish I won in 2nd grade by throwing the ping pong ball in the bowl. Well that fish lived until I was in college. My brother's took care of it for me when I left for college. It was in a tank all by itself by then, huge fanned tail and I swear either it was sleeping
Post a Comment
Read more
More posts