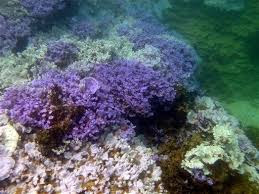 Hi Everyone... Well look at that purple coral. Do you think it is pretty? It is...but unfortunately this color change means it is dying. One of the MANY things I learned since last Sunday during the World Oceans Week presentations and films. This picture is from Lizard Island on the Great Barrier Reef of the 2016 warming, which lead to 29% of the coral reef dying and 67% of the Northern Reef dying due to warmer waters. This information was in the Chasing Coral film which you can watch FREE   online from Netflix now. Tonight at 6pm I will provide some information I learned from each of the conferences, starting with last Sunday's Blue Water Summit , then Monday's United Nations Conference , Tuesday's Capitol Hill Conference & then Tues-Fri's Earthx Oceans Conference . If you did not get a change to watch and learn during the week, come tonight & I'll give you a recap of the big things I learned and the information I think you definitely need to know
Post a Comment
Read more
More posts